This sweet and surreal video features actor Tom Skerrit (Top Gun, MASH, Alien, Picket Fences, Brothers & Sisters) as a patient visiting a mental hospital where Poor Moon are his caretakers, popping pills and dancing with the band and other patients.

Directed by The Academy Creative Collective directors Austin Wilson & Harry Calbom, have a peek below…

Poor Moon are currently touring the US, just finishing a run of dates with labelmates Beach House.

PINS – SAY TO ME from PINS on Vimeo. 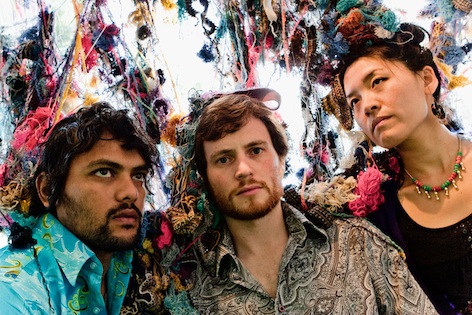 Wonderful interactive footage of Zun Zun Egui playing The Hospital Club sessions is up now on The Line of Best Fit.

Following excellent reviews for third album The Sparrow, including a CD of the Week in the Sunday Times, and a sold-out London Lexington show last month, everyone’s favourite dandy kiwi Lawrence Arabia has just unveiled an intriguing video to effortlessly melodic new single ‘The Listening Times’.

THE SONG:
It’s about this kind of conversational dead end that happens at roughly 6am when you’ve been up all night partying. When the last vestiges of everyday humanity begin to ebb from the gathered personnel and they become conceited, dumb beasts, talking endlessly about being young and “living in the moment” and stuff like that… It’s a peculiarly London song, written on the steps of a lounge room where I’d experienced numerous murky instances of listening times.

THE VIDEO:
Initially I’d had this idea to work with Amelia Handscomb, the photographer who did all my album artwork and promo shots. We’d got into this very pretentious realm of influences for the photos – lots of gloriously posed shots from the 20s – Man Ray and Antonin Artaud – and I was hoping that we could do something similar with this kind of imagery, moody lighting and portentous symbolism. The upshot was that Amelia was too busy with other amazing stuff to do it and I ended up working with another Wellington-based artist called Simon Ward, a filmmaker who’s made some magnificently crafted music videos.

The second idea we stumbled upon was to create the appearance some kind of live television special – I had in my mind some kind of old television special that felt like some enigmatic “no-place” – very hard to describe, and consequently I was unable to find an example of it for us to reference. But I knew my vision was kind of Eastern Bloc-ish, so eventually Simon and I found this seam of brilliant Polish pop music specials from the 1960s, all dramatically lit and ominously shot. Quite serious despite some of the fluffy musical content. So basically with the aid of a cool old VHS camera and Simon’s wonderful instincts and attention to detail, we paid homage to this lost style of pop video.